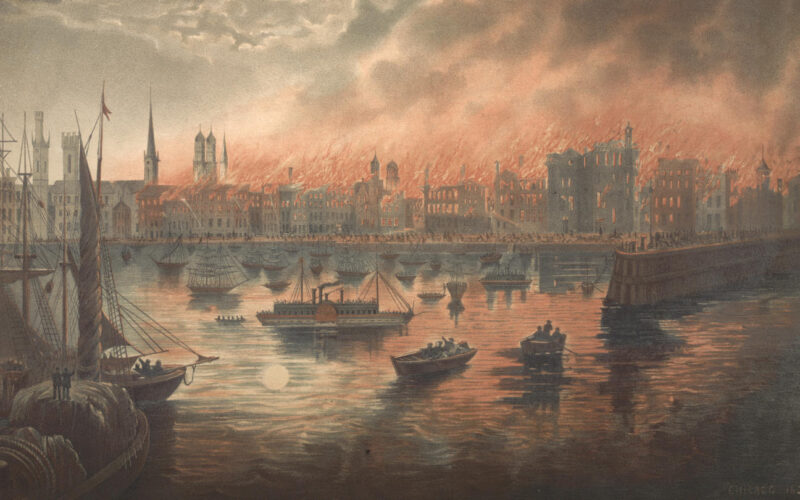 Episode 16: The Second Star – The Fire

There is one story well-known throughout the world about the Windy City and a cow kicking over a lantern that set the Great Chicago Fire in motion.  The fact that the story of Catherine O’Leary’s cow is totally false seems not to matter, as this wrong-headed legend continues to perpetuate itself with the general public.  As the newspaper editor Dutton Peabody says in the 1952 film The Man Who Shot Liberty Valance, “when the legend becomes fact, print the legend.”
And so it is, a hundred and fifty years later, Mrs. O’Leary and her cow live on in popular culture.

The events of the evening of October 8th, 1871 would be the culmination of a prolonged hot, dry summer in the Midwest, and when Chicago began to burn, there were fires burning in several other places as well.  However. Chicago and the legend of Mrs. O’Leary’s cow eclipsed the reporting of the other fires, and stuck in the popular imagination.

The Great Chicago Fire became the second star on the flag of Chicago, a marked tragedy, as approximately one-third of the residents lost their homes and the more than 300 who lost their lives.  But the fire was also considered a beginning for Chicago, a reset, a blank slate — that would allow the city’s business leaders and architects to imagine a new and better Chicago to rise from the ashes like a great phoenix.

In this episode, the Windy City Historians interview William Pack, a historian and author of “The Essential Great Chicago Fire” (2015) to recount the events of that faithful Sunday night when smoke was spotted southwest of the city center, near the intersection of Jefferson and DeKoven Streets.  It is an illuminating story of mistakes, delays, human error, and heroism, and a transformative event for the young city on the prairie that became the “City on the Make” as later chronicled by Nelson Algren.  Two days after the fire co-owner and managing editor of the Chicago Tribune Joseph Medill wrote, “We have lost money, but we have saved life, health, vigor and industry.  Let the watchword henceforth be Chicago shall rise again!” In December of that year Medill would be elected mayor of the City of Chicago as a candidate of the “fireproof” party serving two terms from 1871 to 1873.